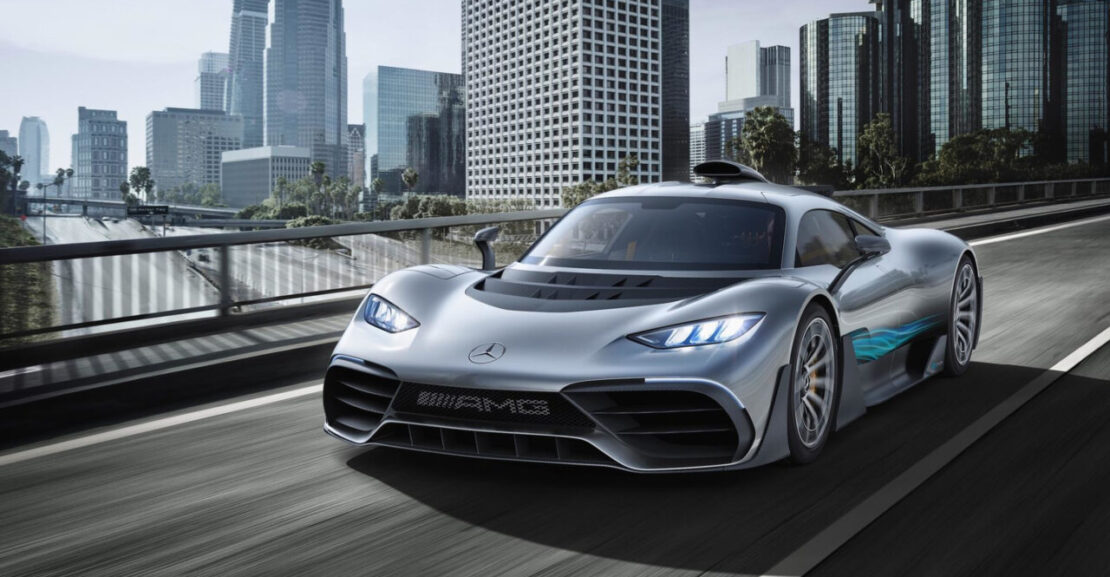 TPE has successfully secured one of the order slots of this special piece.

Lewis Hamilton, the F1 racing champion, has repeatedly done test driving on this car and the performance is said to be at its best.
This AMG One will be the first-ever road car with an F1 engine.
1600cc F1 hybrid engine with 2 electric motors, max output of 1000 hp, and a max speed of 347km/h.
Limited production of only 275 units worldwide will be produced and all order slots are sold out. 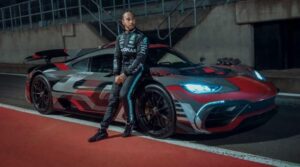 The Mercedes-AMG One (R50, stylized as ONE) is an upcoming limited-production plug-in hybrid sports car manufactured by Mercedes-AMG, featuring Formula One-derived technology.

It was unveiled at the 2017 International Motor Show Germany by Formula One driver Sir Lewis Hamilton and head of Mercedes-Benz Dieter Zetsche. The production of the car is planned to be 275 units and have stated that production will not be increased from the planned 275 units, in order to maintain the exclusivity of the car.
The AMG One is being shown alongside Hamilton’s 2020-spec F1 car, although it would’ve probably been more fitting to show the championship-winning car from 2015.
That’s because the hypercar uses a variation of the hybrid 1.6-liter V6 that powered the Mercedes F1 W07 Hybrid racer. Revving up to 11,000 rpm, the combustion engine works with four electric motors, pushing the car to speeds exceeding 217 mph (350 km/h). 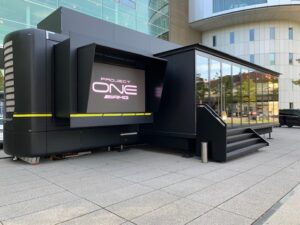 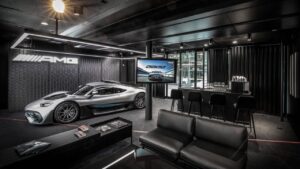 The powertrain of the Mercedes-AMG ONE is expected to be rated at 475–775 kW (646–1,054 PS; 637–1,039 hp) through a hybrid drivetrain that shares many features with modern Formula One cars.
The car has five motors with different functions onboard: one internal combustion engine (ICE) and four electric motors.

The Mercedes-AMG ONE will utilize a modified 1.6-liter turbocharged 90-degree V6 engine from the Mercedes-AMG F1 W07 F1 car, as confirmed by Mercedes-AMG board member Ola Källenius.
Modifications will be done to the engine due to the engine’s illegality in RPM idle and redline.
The head of Mercedes-AMG, Tobias Moers, states that the engine will be at 1,280 rpm when idle, and at 11,000 rpm when at its redline limit. However, the engine will only last for 50,000 km (31,000 mi) and the owners will have to return their cars for engine refurbishment.
The ICE produces 558 kW (759 PS; 748 hp), with torque figures still unknown.

The ICE will work in conjunction with four electric motors: a 120 kW (163 PS; 161 hp)
Motor Generator Unit-Kinetic (MGU-K) coupled to the crankshaft, a 90 kW (122 PS; 121 hp)
Motor Generator Unit-Heat (MGU-H) coupled to the turbocharger, and two 120 kW (163 PS; 161 hp) electric motors at the front axle.
The MGU-K and MGU-H are Formula One-style motors responsible for recovering energy and improving efficiency during the operation of the car.
More specifically, the MGU-K serves to generate electricity during braking, while the MGU-H serves to eliminate turbocharger lag and improve throttle response by keeping the turbine spinning at high speeds.
The final two electric motors drive the front wheels to allow for an all-wheel-drive drivetrain and the sum of these four electric motors will contribute 450 kW (612 PS; 603 hp) effective power to the total power output figure of Project One.

The transmission will be an 8-speed single-clutch automated manual transmission variant (which is actually a similar type of transmission used in modern Formula 1 cars) and will deliver the bulk of the engine power and torque to the rear wheels.
The use of a single-clutch over a dual-clutch transmission was due to AMG‘s engineers wanting to keep the car light and due to concerns over the dual-clutch’s ability to handle the high-revving V6 ICE.

Project One has wheels made of aluminium alloy and carbon fibre with diameters of 19 inches at the front and 20 inches at the rear with centre-lock wheel nuts.
The tyres are Michelin Pilot Sport Cup 2s with codes of 285/35 ZR 19 for the front and 335/30 ZR 20 for the rear.
The brakes are ventilated carbon ceramic discs.

The interior is mostly minimalist and driver-focused, continuing the Formula One theme of Project One.
This includes a Formula One-style steering wheel and pedals, and a
driver-oriented central infotainment screen.
here are some traditional luxury features in the interior, notably napa leather and hand stitching on the bucket seats.

The exterior of the car is designed primarily for aerodynamics, although it still maintains a profile reminiscent of a road-legal car.
The notable aerodynamic features include the large front air inlets, the roof-mounted air intake, and the large aerodynamic fin extending down the back half of the car. 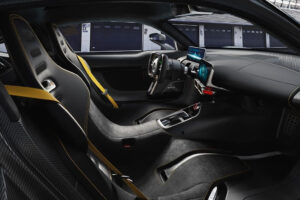 The visualizer allows a future owner to go through the numerous customization options offered by the three-pointed star for what some consider as being a spiritual successor of the CLK GTR Straßen version.
The owner’s spec for the time being is a red/burgundy livery with matching seatbelts and stitching on the seats where the “AMG” logo on the headrest has the same finish.
The configurator also has some striking shades of green and yellow, along with the classic silver finish the showcar had back in September 2017 at the Frankfurt Motor Show. 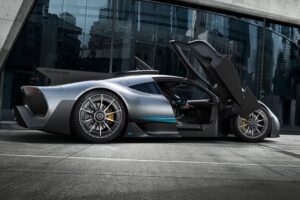 Deliveries are scheduled to kick off in 2021 after some delays caused by the difficulties Mercedes-AMG ran into when attempting to make the turbocharged 1.6-liter V6 engine comply with emissions regulations, particularly the stricter WLTP standard.
As you may recall, the engine with its 11,000 rpm redline and over 1,000 horsepower is adapted from the 2016 F1 W07 car and will be good for 31,000 miles (50,000 kilometers) at which point it will require a rebuild.

Price
List Price (tax paid) + Premium Price + Our Commission(3%)
The premium price has been changed up day by day. Please contact us for the price.

The order slot we secure is only one slot.
Please note it. 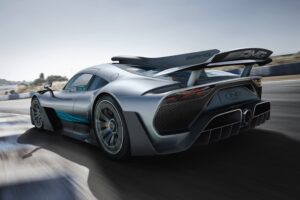